A year ago, I took to AWS to solve a label ordering challenge in my productivity application Todoist. I’ve summarised it in this project page along with the outcome of this addition.

I recently revisited to see if the REST API had been updated to allow reordering of items. It had not. The relevant property was read-only, and therefore, the functionality was still exclusive to the Sync API.

I took this as an opportunity to learn the Sync API for which there was an official Python library. Additionally, the need for an external library would allow me to experiment with AWS deployment packages and layers for Lambda.

You can find all my code and supporting files for this on my Github page.

I intended to automate the sorting functionality that is present in the application already via manual action. These are:

Furthermore, rather than enforce a global sort, each project should have a default sort or be left to the current manual sorting.

The first step is to sync state with Todoist and retrieve our project items into an array. As this array contains all items, I enumerate and pick out the items for which the project ID matches. As I do not need all properties from the original object, I elected to use a dictionary to store a subset for later processing.

Lastly, this array needs to be sorted by child_order to reflect the current sort in the application.

This is accomplished via def getTasksInProject(intPojectID, items).

For the most part, the sorting code is vanilla bubble sorting. The difference is how we process the relevant properties:

Sorting by priority is a simple number comparison if tasks[i]['priority'] < tasks[i+1]['priority'] - only swapping on a difference of priority. Where items have the same priority, their order should remain unchanged. The ordering of displaced tasks should be respected. 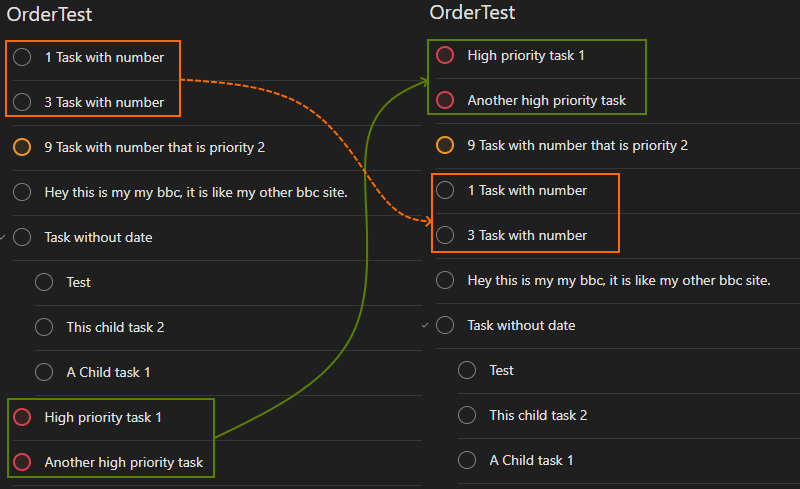 Sorting by due date required me to deal with the scenario the property might not be present as it is optional. Our permutations during the sorting passes were: 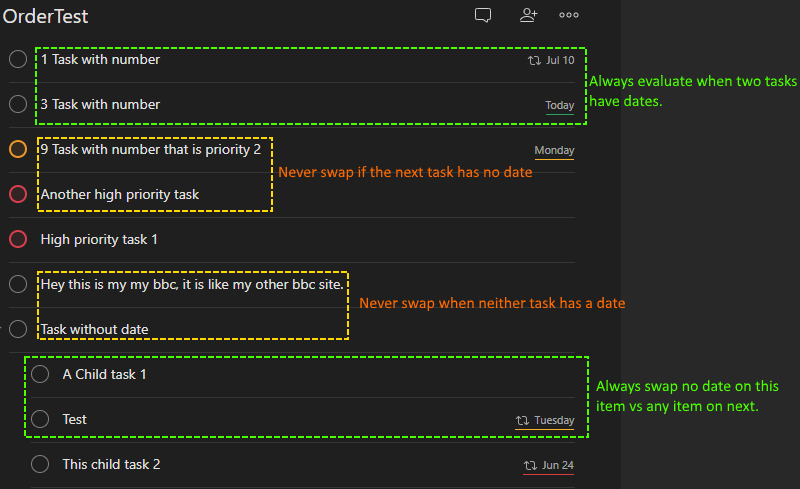 Sorting by name I underestimated. Initially, I processed the tasks with a similar approach to priority - using a lower() version of the content to ignore casing. However, an edge case emerged as I became aware that the value of content could contain markup.

The observed behaviour of the native Todoist application was that it considered only the visible text in sorting by name. In the following example, the content of this item starts with [ however, Todoist considers it m alphabetically:

Would be treated as the following during sorting:

Hey this is my my bbc, it is like my other bbc site.

I experimented with several options eventually decided that a regular expression solution was a good fit. The visible text (a substring) is extracted and replaced the markup during the comparison.

You can see an example of this interactively on regex101.com which explains it well.

Once I had configured the library locally and tested successfully, I proceeded to create a Lambda layer from the Python virtual environment.

Upon executing the function for the first time I received the following error:

It transpired that the cache location in the Todoist library (cache='~/.todoist-sync/'):) was not compatible with the Lambda environment.

I needed a location to hold the sync cache - however, the default directory was inaccessible. The Lambda security overview provided an answer:

On this basis, I elected to modify the cache location to use /tmp. I also noted:

Though Lambda execution environments are never reused across functions, a single execution environment can be reused for invoking the same function, potentially existing for hours before it is destroyed. Functions can take advantage of this behaviour to improve efficiency by keeping local caches, reusing long-lived connections between invocations, and pre-computing common results.

This information shaped my decision on whether I would split the sorting code into several Lambda functions or not. A singular Lambda function would potentially have access to an existing sync cache.

I took an MVP approach and reused the state machine for my Label automation. I decided to form the input as follows:

While this allows me to prove the concept - there would be some value in merging them and migrating the Label sorting to the Sync API.

Going through this process has given me some appreciation as to why sorting operates as it does presently. A client-side sort and sync approach and an API to sort how you like is a measured approach to the problem.

Centralised automatic sorting at scale could be an expensive operation though it would be a fascinating problem to solve.

I’ll end this post by closing the Todist task I’ve been using to track this very post.